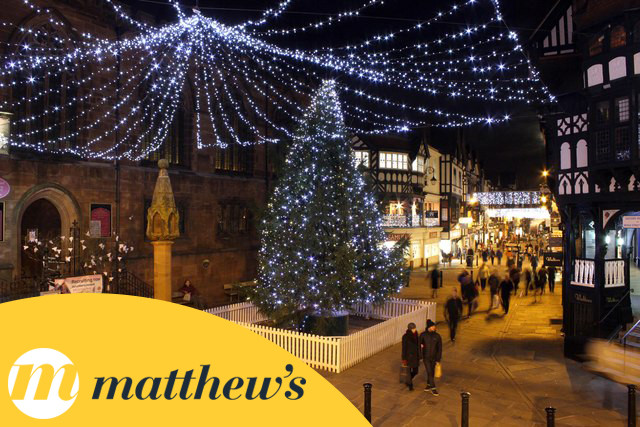 Chester is a city that is rich with culture and that is one of the reasons it is such a popular place to live.

Chester’s history and culture is one of the reasons we most often hear cited by our buyers for why they want to move to Chester. This vibrant atmosphere is easily noticeable all year round, but especially at Christmas time.

Chester is definitely the place to be in the lead up to Christmas with a whole host of fabulous parades, markets and fairs, which entertain locals and bring huge crowds of tourists every year.

Christmas Lights Parade – Very soon Chester will switch on its Christmas lights, illuminating the streets with festive sparkles. To mark this event the city is also holding a parade on 17th November at 7pm starting from the Town Hall.

Chester Cathedral Christmas Tree – The beautiful medieval Cathedral is a major tourist attraction for Chester city in its own right but it becomes even better throughout the festive season with its annual Christmas Tree Festival. From 26th November 2016 – 8th January 2017 the Cathedral cloisters are filled with over 40 decorated Christmas trees in various styles for visitors to admire.

Lantern Parade – On 1st December at 7pm Chester will light up the winter darkness with the magical Lantern Parade. Hundreds of children will parade holding handmade lanterns aloft. This parade starts at the forum Shopping Centre and ends in Town Hall Square.

These are just a handful of the Christmas festivities you can enjoy in Chester during winter and prime examples of why our culture is so valued by our guests and residents.